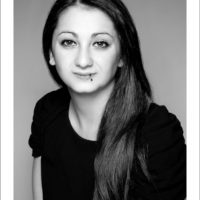 At only 20 years of age, Katherine Tessier studied at the Campus Notre-Dame-de-Foy and quickly figured out how to stand out in the fashion industry in Quebec. She has taken part in the Festival Quebec Mode for three consecutive years. Katherine decided in January 2014, to start her own business. She took the necessary steps to launch her first collection in October 2014 to the Baie de Beauport. Working full-time on this first collection, the story-line of the collection was cruising; Ms. Tessier knew how to find the resourceful people which she needed. She already had a foot in the industry because of the voluntary help carried out since April 2013. With all the gained experience, the fashion designer carried out a high fashion parade of colors.  While she continued her studies, Katherine created a second feminine ready-to-wear collection. During the summer of 2015, she did an internship in New York at Zimba Collections for two months. She always showed perseverance, leadership and determination.  Already having some journalistic articles about her, Katherine has been seen on the Newspaper of Quebec, Le courrier de Portneuf, MAG2000, L’Éclaireur, Quebec Scope Magazine and Elle Quebec. She has seen on the different magazines as Vogue UK, Glamour UK, FashionMag FR, FashionMag US, FashionMag CA. Ms. Tessier took part in more than one project such as La Boîte à Linge and La Grande Braderie de Mode Québécoise to sell her collections. She also took part in the Robe en noir ladies dinner on May 14, 2015. It was at the Quebec Hotel and the profit was for Opération Enfant Soleil. The first collection of Katherine Tessier was presented in many events. Katherine presented her collection at the Festival Quebec Mode in May 2015. She started there as a volunteer in 2013, was a little more known in 2014 and ended up on the podium in 2015. She participated to the Vancouver Fashion Week in March 2016, she presented her Fall/Winter 2016 collection.

Sorry, no posts matched your criteria.