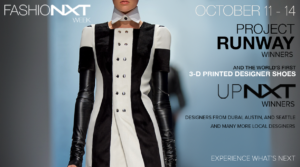 FashioNXT is once again elevating the fashion experience.

The 6th annual FashioNXT Week is being released, and in many accounts, is the most compelling lineup to date with the runways sporting all things fashion from elegant evening wear to wearable fashion technology.

The highest quality contenders at the UpNXT Emerging Designers Competition finale on Wednesday, followed by the most talented all-stars from past UpNXT competitions will make you proud of the extraordinary caliber of designers catapulted from this event. Two of the most avant-garde designers Project Runway has produced will bring forth their most fashion-forward collections to date.

Project Runway’s two-time winner, Seth Aaron, will show a Japanese inspired collection featuring the world’s first 3D printed designer shoe line, which you can order at the show. The week will open on Wednesday with two extraordinary couture bridal designers and end with an amazing couture designer from Dubai on Saturday. In line with the global trend of an upsurge in men’s fashion, you will see at least one Menswear designer each night.

We are releasing the tickets to FashioNXT patrons and followers early on so that you can choose the best seats for yourself, before others snag them. FashioNXT is an entertaining and high-energy, week-long event that you will love to experience with your friends. Refer FashioNXT to others by forwarding this email to your friends (CC or BCC us). We will apply 10% of the ticket purchase amount by this referral (as tracked by the email addresses) towards your purchase of 2018 FashioNXT tickets or merchandise.