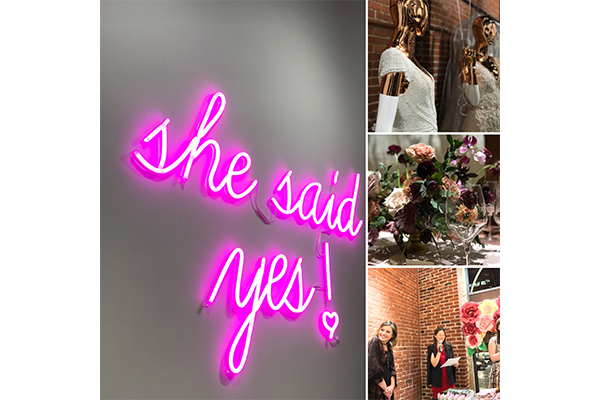 What brought you to this new place?

It was time for us to look for a new place,  and we really love this area and they call this area the west end and it’s so close to the pearl. But we still want to be downtown because we’ve been in downtown for 20 years. So this space came about and when I walked in I was just so amazed by the brick wall and just the way it was layed out ( the fitting rooms). And the size is just perfect about 3200 sq ft.

Have you added more designers?

We actually have. We added a designer by the name of Dalana, a Hungarian designer. We also have Truvelle, which is a line from Vancouver Canada. So those two lines are new and we are excited! We are always looking for more.

Are you looking to support local bridal designers?

Yes! We love local. So we are hoping to work with more local designers. We are all about local!

Any current designers your working with locally?

Stephanie Dong I know is one of the local designers, but I know we can always talk to up and coming designers in Portland.

Stephanie is a current designer who contributes to Ania’s bridal. She attended the Art Institute of Portland, which led her to have her own collection. Stephanie has been showing with FashioNXT for the past Five years.

Set an Appointment or see Ania Bridal events at:  https://www.aniabridal.com/

Ania’s bridal launch party was overall great! There were plenty of smiles in the room with much appreciation from the hard work their staff contributed. We are excited to see Ania’s grow with their new location!