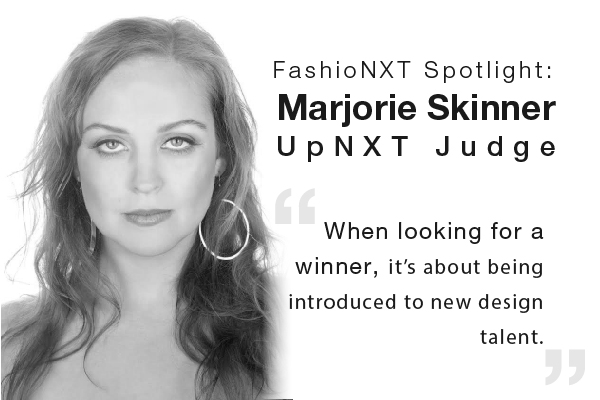 UpNXT is FashioNXT’s emerging designer accelerator. This competition has been going on for several years and is a great way to build awareness of local emerging designers. I had the opportunity to interview a few judges for the competition to see what they look for and what inspires them about FashioNXT.

Our first judge interview is with Marjorie Skinner. She has been heavily involved in the fashion scene in Portland for several years; she worked as the managing editor for Portland Mercury for 10 years and then became the editor of the “Sold Out” fashion column in 2006. She loves to support fashion in Portland and emerging designers hold a special place in her heart. Check out what she has to say about FashioNXT:

How long have you been a judge for UpNXT?

I’ve been a judge for what is now the UpNXT competition since it was founded, I believe! It’s gone through a few name changes since then, but I’ve been a supporter of the program since the early days.

What has been the most progressive style that you have seen since you have been judge?

It’s fresh in my mind, but German Madrigal’s collection from last year stands out as something I would call “progressive.” We see a lot of well tailored, user friendly, pretty designs, but it’s less often that a designer is able to be totally modern and say something new about physical identity in the world and have that come off correctly—he nailed it, of course.

What is something you look for when choosing a winner?

To me it’s less about naming a winner than it is about being introduced to new design talent. I certainly like to be part of helping someone out as a reward for their talent and work, but the most fun part of the process is actually the audition, where you get to see who’s come out of the woodwork. Even if they don’t make it into the finals the first time they show up, it’s still great to get on the radar.

Keep up with the FashioNXT blog to read other tips from judges! If you would like more information about the previous participants or about UpNXT in general check out this link: https://fashionxt.com/UPNXT

Applications for the 2016 UpNXT emerging designer accelerator are available now; it is a great opportunity for brand exposure and growing your business.  Apply here if you’re interested: https://secure.jotform.us/form/51867979782177

Tickets are also on sale for the 2016 FashioNXT: The Shows. Visit this website for more information: https://fashionxt.com/Tickets